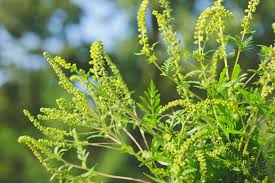 Ragweed is a widespread weed in Québec. It is present from May to October and dies at the first frost in the fall. In mid-July, ragweed begins to bloom and produce pollen. The pollen travels through air in a fine dust and causes allergic reactions in people who are sensitive to it. It affects over a million people in Québec between July and October

There are 3 varieties of ragweed found in Québec: Common Ragweed (Ambrosia artemisiifolia), Giant Ragweed (Ambrosia trifida) and Perennial Ragweed (Ambrosia psilostachya). From late July to mid-September, the plants release large amounts of pollen in the air, which constitute almost one third of all pollens produced in southern Québec.

This mass of pollen causes seasonal allergy rhinitis (hay fever). At least 17.5% of the provincial population suffers from this allergy.

Reducing the prevalence of ragweed is essential for public health. So, pull it up before the end of July!

Modification of municipal evaluations procedures in times of pandemic